We like to think that our beliefs, and disbeliefs, are founded on reason and close, thoughtful observation. Only in theory do we begin to suspect the power of aesthetics to shape our lives.
—Tobias Wolff

This is a world where it is estimated that 87% of life is unknown to science. Try to grasp that: twelve million species that remain undocumented and unrecognized. The fact is you simply can’t. It is just a number. Another of those statistics & figures that we are swamped with every day in the newspapers, the internet, radio and television.

In this sort of world, filled to bursting with life, most organisms go unnoticed. But, life is everywhere: overhead, underfoot, in liquid, air and solids, in and on other organisms. From the most urban, congested, and polluted environments to the most isolated, we can’t escape it. Life is a marvel, such a marvel that we spend billions of dollars looking for it on other worlds. Yet if we find that “other” life in our solar system it will most likely be some microscopic bacterium or other single-celled organism. Though that, too, will be marvelous, this creature will not be as complicated as a simple, earthly tiger moth. Like the astronomer in Aesop’s fable, however, who was so fixated on the sky that he fell into a hole, we persist in our search of the stars for what we so easily—so blindly and uncomprehendingly—take for granted right here on our own planet.

Some of us are able to transcend that jadedness or inattention. Every day, there are those of us who work with organisms that take our breath away, we see structures and colors and events whose complexity and beauty strike us dumb with an inability to convey our appreciation. The truth is that most natural scientists got involved in the biosciences because of aesthetics. Whether children or not, the beauty of a plant or animal or a natural phenomenon impressed us. And we, who value these things, persist in the idea that if others could only experience what we are able to see they would value these things, too.

Too often, though, it is not possible to show these things to others. If the subject is small, we may not have the technology, or the event may be too fleeting, or we are in a remote place. For the smallest of beautiful things, the appreciation that starts with aesthetics is unlikely simply because of size. And unseen, unknown, unappreciated, life that is beyond awareness will also be beyond our interest in understanding or preserving it

Joseph Scheer’s work was actually borne out of some sort of spur-of-the-moment impulse that we look back on years later as “the moment.” Those seminal moments when our lives or careers or attitudes change. Or perhaps Joseph would counter that it wasn’t quite that sort of transcendent event—perhaps he would insist that it was a slower realization, a dawning awareness of what he had uncovered.

But the fact is this: Joseph’s career took a new direction when he stuck a tiny gnat on a scanner.

Impressed by the intricacy of this animal blown up to thousands of times its natural size, he tried other creatures. Joseph’s moth scans have impressed a public that is shot full of misperceptions about life beyond the edge of awareness. And as always when we are challenged by ideas that counter our long-held beliefs we respond with doubt: “those can’t be moths,” “those can’t be local, they must be tropical,”  “moths are small brown things, not like these.”

And what we hope, what we scientists and artists and others who are concerned with life on this planet hope, is that Joseph creates in people “a moment” of their own. If not a reminder, a first realization that there are marvels all around us, splendor on our doorstep, awe-inspiring beauty everywhere if only we open our eyes. Because what we know is that without a personal appreciation of the natural world, those things that remain beyond awareness are doomed. We must realize that aesthetics, a term whose breadth we cannot completely quantify or qualify, and the personal values and ethics emanating from it, will be the only thing that saves nature in the end. It is this realization that gives Joseph Scheer’s work meaning well beyond pretty images on a wall—a power and impact that we scientists might find difficult to express but that all of us, scientist or not, must agree makes all the difference in a world filled to bursting with life.

Moths on a Flatbed Scanner 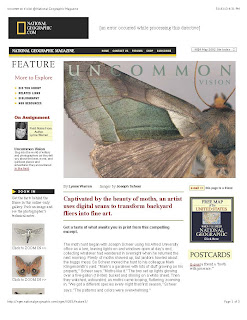